Dozens of large-cap stocks saw their prices swing wildly at the open of trading Tuesday, sending companies including Wells Fargo & Co. and Morgan Stanley to brief but sharp plunges from which they mostly quickly recovered.

The next issue of FP Investor will soon be in your inbox. 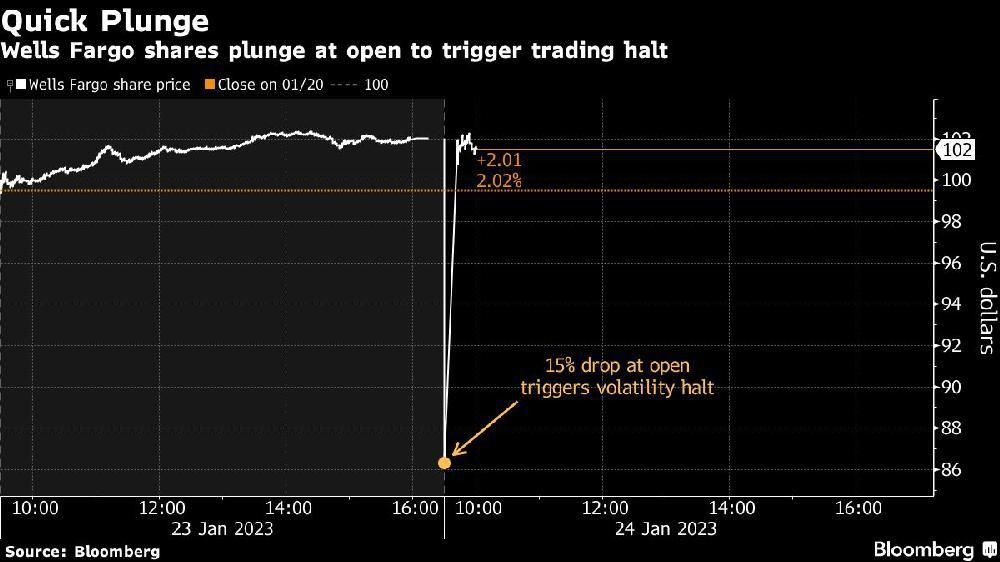 Advertised by Market One

“It’s a little concerning,” Oanda senior market analyst Ed Moya said by phone. “These are not your typical meme stock, easily manipulated companies, these are Morgan Stanley, Verizon, AT&T, these are some of the giants.”

Tuesday’s transactions occurred in New York Stock Exchange-listed securities and took place on other platforms, including ones overseen by CBOE Global Markets and private venues reporting to the Finra trade reporting facility.

At least 40 S&P 500 Index stocks were hit with trading halts, according to data compiled by Bloomberg. Other impacted shares included the likes of Walmart Inc. and McDonald’s Corp. These stocks saw drops of at least 12 per cent before they were halted. Their moves have now rebounded to less than one per cent in either direction.

Episodes in which computer glitches lead to erratic pricing are rare on American exchanges but not unheard of. Perhaps the most famous was the August 2012 incident in which faulty software employed by one of the biggest market makers, Knight Trading, riddled exchanges with erroneous orders and sent shares swinging around the market. The event sent Knight spiraling toward insolvency before it was bought out by a coalition of trading firms. Last year, Citigroup Inc.’s London trading desk was behind a flash crash that sent shares across Europe tumbling, while in Canada a software-issue caused a 40-minute outage across three stock exchanges.

The start of trading in most American stocks involves a complicated but usually routine process called the opening auction, designed to limit volatility resulting from orders for shares that pile up before the start of the regular session. In it, a computer balances out supply and demand for a particular stock by establishing an opening price that can be viewed as the level that satisfies the largest possible number of traders.

“We don’t have all the details yet, but what it looks like is that some stocks opened and were automatically or were erroneously triggered for limit up/limit down, which threw them into a halt status,” said Jonathan Corpina, senior managing partner at Meridian Equity Partners who typically works on the floor of the New York Stock Exchange.

“All of our phones are lighting up,” he said. “We’re trying to field calls from our customers and try to explain to them what happened, what’s going on and relay as much accurate information so they understand what’s happening. But as of now, things are still unfolding.”

—With assistance from Bailey Lipschultz and Jessica Menton.