There’s a growing consensus that a lack of supply is the prime culprit behind Canada’s housing affordability woes. But if housing start data from 2022 is any indication, doing something about it is going to be a challenge.

Figures released Jan. 17 by the Canada Mortgage and Housing Corporation (CMHC) showed urban housing starts actually declined year-over-year in 2022, falling a little over one per cent to 240,590 units.

Sign up to receive the daily top stories from the Financial Post, a division of Postmedia Network Inc.

The next issue of Financial Post Top Stories will soon be in your inbox.

Though the CMHC noted starts remained at an elevated level as compared to recent years, they are a far cry from the levels needed to even put a dent in the shortage the national housing agency identified in June, when it found 3.5 million additional new housing units would be needed by 2030 to improve affordability. That would equate to more than a doubling of the current pace. Even the more modest increases of 30 to 50 per cent that the CMHC later found the labour force could support in a best-case scenario in some provinces seems a long way off. 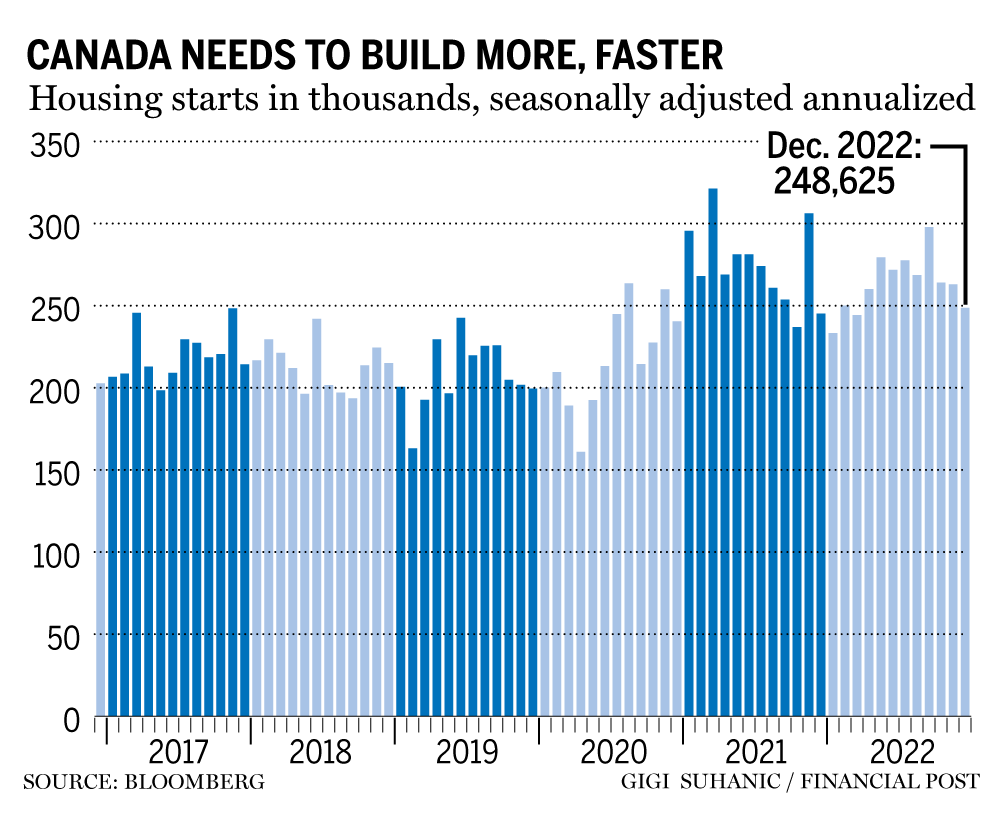 Many economists and housing experts are warning that there are no quick fixes on the supply front and that things may yet deteriorate.

“Housing takes a long time to construct and there is a long lead time before shovels go in the ground,” said Ted Kesik, professor of building science at the University of Toronto, in an email. “Significant increases in output take years and that is why so many people are worried about the housing shortage and how it may actually get much worse before it gets better.”

Most recently, Ontario’s Ford government opened up 7,400 acres of the Greenbelt (a natural area just north of Toronto) for development — a move that sparked political backlash from conservationists.

Even with additional funding, improved zoning and new land, in recent years the number of workers needed to build has fallen short, making it a limiting factor to any ambitious growth plans.

“Unlike some other industries, the building industry has a fixed capacity to construct more housing and it is losing many of its older and more experienced workers who are retiring,” Kesik said. “There are not enough new people entering the workforce to offset those leaving and so the workforce is a significant factor.”

Bill Ferreira, executive director of BuildForce Canada, echoed the concerns about labour, noting the federal government was making an effort to promote skilled trades, but that the environment was nonetheless challenging.

“The latest census data points to the fact that 20 per cent of Canada’s population is between the ages of 50 and 64. And only 16 per cent are under 50. So when we start projecting out over the next 15 years, we know more people will be leaving the labour force to retire than coming into the labour force,” Ferreira said.

The magnitude of the challenge is daunting. CMHC chief economist Bob Dugan said that starts in 2021 and 2022 were well above the previous decade’s pace, but have to grow much further from there.

“The average pace of (all) housing starts (from) about 2010 to 2019 was about 201,000 starts a year,” Dugan said in an interview. “So even the urban starts number that we saw in December is well ahead of that pace. But the key problem is we need much more in terms of supply … If we want to restore affordability to housing markets, we have to find a way to double the pace of starts.”

That means government programs need to find a way to incentivize higher levels of construction, despite labour constraints.

Robert Hogue, assistant chief economist at the Royal Bank of Canada thinks it is still unclear how much capacity constraints will ease over time.

“At the end of the day, even if all levels of government remove regulatory obstacles to build more housing, construction activity may still be held back by capacity constraints and lack of labour in particular,” Hogue said.

In October, the federal government announced its commitment to admit 1.2 million immigrants into the country between 2021 and 2023 who may provide the support the building industry so desperately needs. However, they’ll also need somewhere to live.

Kesik predicts that, if history repeats itself, efforts to create more housing will produce results, but will need time to take effect.

“My parents were immigrants and they told me that after World War II there was a terrible shortage of housing and they had to live in very bad housing that was infested with bugs and vermin,“ Kesik said. “Eventually things got better but it took almost a decade.”

Given today’s construction realities, even that kind of timeline might be ambitious, he said.

“In those days, the 1950s, houses were less than half the size of what is being built today with few features and so these were affordable and got built very quickly. We are not building as many single family detached houses compared to condos nowadays and these projects are slow to deliver our much needed housing.”